Yesterday I released version 1.0 of AnkiDroid (flashcards app for Android).
With already 140.000 users, why is AnkiDroid only at version 1.0?
We released many 0.x versions, and now we feel the app is ready to be called 1.0!
The number of users has been multiplied by 8 in less than a year: 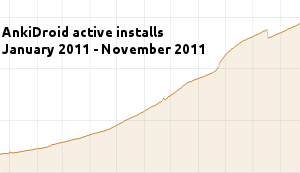 With 1.0, today is a good opportunity to describe how the AnkiDroid community of contributors works.

1) We do all we can to be friendly with all newcomers. We answer all questions and thank users for using the product.

2) We encourage everybody to participate, at every level. We introduce users to the bug tracker, and liberally give them rights to edit the Wiki, which makes them feel they are contributors rather than just users. Similarly, everyone is able to fork and edit the code, without having to ask the permission to anyone. Localization is the archetype of this spirit: Anyone can translate strings, and they are included in AnkiDroid automatically. Like on Wikipedia, consensus is the rule.

Why do we need to keep involving more and more people? Well, contributors have day jobs or exams, so their individual participation includes periods of activity alternating with periods of inactivity. See for instance this timeline of contributions, one color per contributor:

The huge majority of contributors are volunteers, but some people are also paid to contribute. Notably, the first Simplified Chinese localization has been sponsored by a Chinese company.

Geographically, developers have always been coming from very various countries: Egypt, Japan, Germany, Sweden, Spain, Brazil... Beta-testers come from virtually all over the globe, with even one in Antarctica. Thanks to this diversity, tricky issues with right-to-left languages or special characters are detected and fixed early. AnkiDroid is now available in 27 languages.

Feel free to comment if you have any question!

If you want your web application to tap into the huge Chinese market, I have a bad news for you.

Until April 2011, IE6 was still the #1 browser in China. Now it is still at 37%.
That's bad news, because IE6 is an old browser with many bugs. Making your website usable on IE6 is very complex, it will typically double your UI custom widgets development costs.

But if you are targeting China, be prepared. In particular:

Chrome recently became the second most-used browser in China, but guess what was the second-most used web browser earlier this year? Not Firefox, not Safari. It was Maxthon, from Hong Kong. It is based on Trident, just like Internet Explorer. There is also 搜狗, that can use IE and Chrome as a rendering engine. Finally, claiming 172 million active users, 360安全 is also based on Trident, and shows the same faults as IE6.

@nicolas_raoul
Posted by Nicolas Raoul at 1:25 PM No comments: Links to this post