My contribution to IEEE's Pervasive Computing 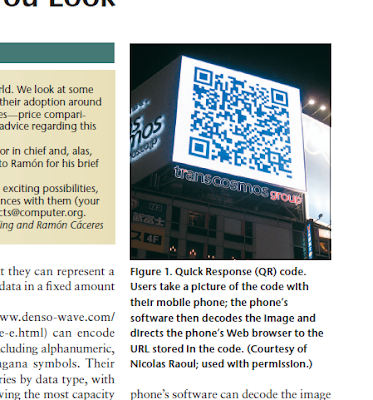 QR codes are big in Japan. Actually, last year I spotted one in Shibuya that is wider than most flats in Tokyo. I took a picture.
Incidentally, the IEEE is publishing an article on QR codes in this month's Pervasive Computing magazine. If you buy it, you will see "Courtesy of Nicolas Raoul" under the first picture of the article :-)
"Pervasive computing" is a synonym of ubiquitous computing, the science of ultra-close human-machine interaction. As the article points out, QR codes are not widely used outside of Asia. But I think they will eventually become popular in the whole world. Recent Android phones are natively able to read QR codes!
Posted by Nicolas Raoul at 5:33 PM 2 comments: Links to this post